Flights to Oklahoma City in 2021

When is the best time to fly to Oklahoma City?

If you’re hoping to spend most of your holiday outside, then the best time to visit the city is during the summer months of June until September. This is when the weather is warm, with temperatures usually in the high teens to low 30s Celsius. However, due to an increase in rainfall in May and June, the months of June and July can become quite sticky and humid. This leads most travellers to book flights to Oklahoma City from late July to October. These months, when the warm weather casts a happy glow on the thriving city, are considered the peak season, which can see an increase in airfares and hotel rates.

Because rainfall can put a damper on just about any outdoor fun, cheap flights to Oklahoma City are commonly found in May and June, when it rains the most. Another less popular time, in terms of tourism, is the cooler months from December through February, when temperatures drop to around -2 to 10 degrees Celsius.

If you do wish to visit during June then a great way to spend a few days is at the Red Earth Native American Cultural Festival. Join thousands of other visitors and tourists who come together to learn about and celebrate the rich and diverse traditions and tribal cultures of Oklahoma. With Native American dance performances, live music, children’s activities, a variety of food stalls and a large parade there is something for all the family to enjoy.

Which day is cheapest to fly to Oklahoma City?

The cheapest day to fly to Oklahoma City is usually Thursday. At the moment, Monday is the most expensive.

Seeing Oklahoma City today it might be hard to believe that before 1887 this land was almost completely uninhabited. Then, overnight, its borders were opened and more than 10,000 people raced on foot, by horseback, in wagons and even on bicycle to set up camp in the new fertile farmland. Many who settled here took comfort in the remote and spacious greenery that made up the vast and lush land.

For the most part, the city seemed to keep to itself, but its solitude came to a screeching halt in 1995 when the Alfred P. Murrah Federal Building was bombed by domestic terrorists, killing 168 people. The revitalisation process has been one of constant hope and togetherness of the city’s residents, and is has come a long way since then.

Today you can experience the city’s new growth, such as the Bricktown entertainment district, or Red Earth, the largest Native American festival in the world. Its seasonal climate, cowboy roots, and western culture make Oklahoma City an intriguing spot for travel any time of a year.

Oklahoma City’s weather changes all year long. In the summer, between June and September, temperatures soar into the high 20’s, while in the winter, from December to February, 4 degrees of cold sets in, with rare occasions of snowfall in January. The most precipitation, however, falls in May and June, and leads into the sticky humid months of June and July.

Getting around Oklahoma City

Once you’re in the centre, ride the Oklahoma Spirit trolleys, which take you through the city centre and the Bricktown entertainment district. A great way to get to other cities like Santa Fe or Fort Worth is aboard the Amtrak Heartland Flyer train. Oklahoma City doesn’t have an Amtrak office, so you can just buy your tickets on the train or online. Greyhound buses also depart daily.

After your flight to Oklahoma City lands at Will Rogers World Airport (OKC), you can hop on an airport express shuttle or take a taxi to get to your hotel.

What airport do you fly into for flights to Oklahoma City?

See alternative destinations where airfare is generally forecast to be close to Oklahoma City flight prices. 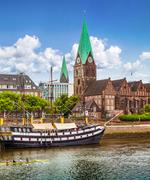 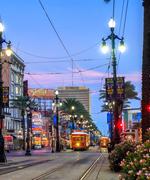 Cheap tickets to Oklahoma City found by our users in Indonesia as recently as June 24, 2021.

See all airports in Oklahoma City, select one to find and compare flight prices.

Flights to Will Rogers

Not set on Oklahoma City? See the cheapest flights to Indonesia. Airfare prices updated on June 24, 2021.