When is the best time to fly to Detroit?

Winters in Detroit are bitter cold and snowy, with icy winds and temperatures from just below freezing and even dropping to -11 C. Spring is damp and chilly with temperatures ranging from around -1 to 20 degrees Celsius. June starts to get warm, and July and August are hot and humid with temperatures around 27-32C. The September and October temperatures start to go down to the mid-teens to mid-20s and can be very pleasant. July tends to be the hottest month and January the coldest.

Summer is the most popular time to visit the Midwest and the Great Lakes. During July and August visitors will find it harder to find cheap flights to Detroit. July and August host many great events to enjoy such as the Meijer All-American Jam at the Taylor Summer Festival, Michigan Jazz Festival, the Common Ground Music Festival, The Great Lakes Folk Festival and the Michigan State Fair.

Autumn foliage season starts around mid-September, and the colours reach their peak by mid-October.

Winter and early spring is the off season; however, despite the bitter winters, visitors book flights to Michigan for downhill skiing.

Which day is cheapest to fly to Detroit?

The cheapest flights to Detroit are usually found when departing on a Sunday. The departure day with the highest cost at present is Saturday.

What time of day is cheapest to fly to Detroit?

Detroit flights can be made cheaper if you choose a flight at midday. Booking a flight in the evening will likely mean higher prices.

Grab the keys to your Model T and turn up the Motown music as you drive through Motor City. While your flight to Detroit might be music-less, there’s no stopping the beat once you hit the streets. Detroit got its nickname, “Motor City,” after Henry Ford rolled the first car off the assembly line in Detroit. Today, Detroit is still centre for automobile production but there’s more than Ford Thunderbirds and classic Mustangs gracing this city.

Tourists booking a holiday in Detroit will find themselves in the entertainment hub of the Midwest. Many travellers head straight to Hitsville USA, where the Motown Sound comes to life and continues to play. But there are other attractions for visitors to Detroit. The Detroit Museum of Art and the Renaissance Centre are popular with tourists, while sports fans will want to book flights to Detroit during football season and cheer on the NFL Lions, or during hockey season and root for the Detroit Red Wings.

How long is the flight to Detroit?

Flights from the United Kingdom to Detroit, United States take 10h-14h on average. The quickest flight from Manchester Airport takes 10h 55m while the quickest flight from London Gatwick Airport is just 13h 40m. If you’re leaving from Edinburgh Airport, the shortest flight offered to Detroit Metro Airport takes 10h 36m. Cheaper flights can take up to 30h from Manchester, 23h from London, and 28h from Edinburgh.

Where can you get direct flights to Detroit from?

Unfortunately, there are no direct flights available from the United Kingdom to Detroit. Luckily, you can find several one-stop flights at most airports. KLM and Virgin Atlantic offer one-stop flights from Manchester Airport with a stop at Amsterdam Airport Schiphol. Finnair and American Airlines both provide flights leaving from Edinburgh Airport that stops at Philadelphia International Airport. You can also find one-stop Detroit flight deals leaving from London by KLM and Virgin Atlantic with a layover at Orlando International Airport. Depending on the airline, you can even find one-stop flights from Glasgow Airport and Birmingham Airport that stop at Amsterdam Airport Schiphol.

How do you get from Detroit Metro Airport to the city centre?

The Detroit Metro Airport is located just 26 miles away from the city centre which can easily be reached by taxi, public transportation, or car rental. You can take the Route 125 SMART bus from the North Terminal down to Fort Street-Eureka Road, or you can take the FAST Route 261 bus to Michigan Avenue in downtown Detroit. On Level 4 of the Ground Transportation Center, you can find taxis and a complimentary shuttle service to take you to the rental car campus which is located in the Northeast corner of Detroit Metro Airport.

What are some things to do in Detroit?

Detroit is filled with many things to do, see, and explore. One of them being the Detroit Institute of Arts which houses a number of exhibits ranging from mummies to African American art. The Motown Museum is also a popular attraction among tourists who love music. You can even head down to the Detroit RiverFront to relax, walk around, or take in the views of Canada from across the border. Belle Isle Park is another must-see site that sits on 987 acres of land where you can find a museum, aquarium, conservatory, zoo, fountain, and much more. Plenty of tours are provided as well to help you easily explore the city of Detroit and learn about its history. Other popular attractions to visit in the area include the Detroit Historical Museum, Comerica Park, Eastern Market, and The Guardian Building.

Do I need a passport or visa to fly to Detroit?

If you plan on staying for less than 90 days, you don’t need a visa to fly to Detroit, but you do need a valid passport, a return-trip ticket, and proof of financial solvency. You will also be required to fill out the Visa Waiver Form upon arrival. If you plan on staying longer than 90 days, you’ll have to apply for a visa at the United States embassy or consulates in the United Kingdom which can take a few days up to a few months to process.

Detroit Metro Airport (DTW) is located 26 miles west of the city. Visitors generally drive from the airport to the city centre, and there are car rental agencies both on and off the airport. Taxi services to the centre and public transport options are also available. The Ground Transportation page of the airport website has detailed information. 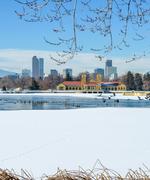